Minecraft: PlayStation 3 Edition, is an edition of Minecraft available on the PlayStation Network. It was announced at Gamescom 2013 and was released on December 18, 2013 as DLC for €18.99/$19.99/£12.99. In April, it was announced that a disc copy would be released sometime in the Summer of 2014 for the aforementioned prices.[1][2] Disc copies are already available in some countries, and are not the most recent version. The Game has all the features of Java Edition 1.12.

Minecraft: PlayStation 3 Edition was released with all the up to date content as on other console versions and future updates will be developed in tandem. Split-screen support for up to four players, online multiplayer for up to eight, Creative mode, Survival mode, and a bundle of Trophies are supported. Texture packs have also been released, with a total of five currently available (including the standard texture).

Minecraft: PS3 Edition and all other Sony editions of Minecraft will not receive Cross-Play with the other console/PE/Windows 10 editions due to Sony refusing to make it possible on their consoles. Currently, Sony has not released an official explanation as to why. Many Sony players (as a result of the lack of Cross-Play) are now switching to other versions of the game. 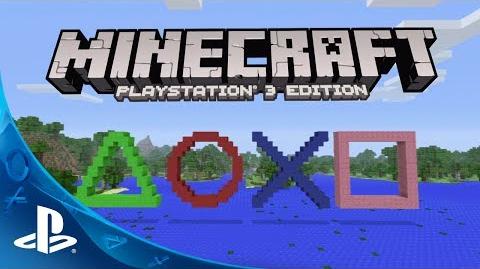 Minecraft PlayStation 3 Edition Trailer
Add a photo to this gallery
Retrieved from "https://minecraft.fandom.com/wiki/Minecraft:_PlayStation_3_Edition?oldid=194987"
Community content is available under CC-BY-SA unless otherwise noted.