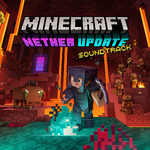 Minecraft: Nether Update (Original Game Soundtrack) is the first soundtrack for Minecraft by Lena Raine, who was chosen as a new composer for the game specifically for the Nether Update. It was released on iTunes, Spotify and YouTube Music on June 14th, 2020.

The album includes 5 songs for a total length of about 20 minutes. It features all of the new tracks created for the Nether Update biomes, as well as two versions of her Pigstep Music Disc track.