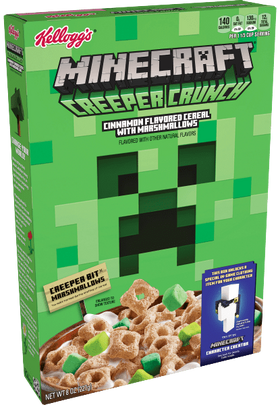 Minecraft: Creeper Crunch is a breakfast cereal that is produced by Kellogg's in the United States, consisting of pulverized oats flavored with cinnamon and "Creeper Bit" marshmallows molded into cubes.[3] The box also contains a code which is able to be redeemed for a character creator item, in which thirteen are available through this method.

All nutrition information is available publicly from SmartLabel and is based off of a 2,000-calorie diet.

The following character creator items are available through this method: