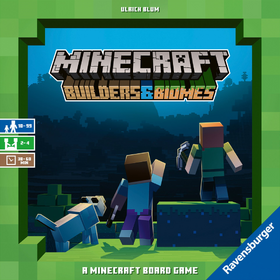 Minecraft: Builders & Biomes is a board game published by Mojang Studios and Ravensburger.[1] In the game, players explore the Overworld and build structures while defeating hostile mobs, with the goal being to score as many experience points as possible. Players are also allowed to collect blocks and weapons.

A set of sixty-four wooden blocks which comprise the following materials:

A set of sixty-four tiles which are divided into sixteen stacks of four tiles each. Half contain buildings, and the other half contain hostile mobs.

A set of thirty-six weapon tokens; sixteen are colorless and are placed on the ends of the stacks of tiles. The remaining twenty are colored for players, consisting of the following items for each player:

Twelve overview cards, which consist of info on scoring rounds.

During a turn, the player must perform two different actions. The same action cannot be performed twice. Once the actions have been performed, play proceeds to the left of the starting player.

Players are allowed to take two blocks from the cube. Blocks can only be collected if their top side plus at least two other sides are exposed. The emerald blocks are wildcards (e.g. they can be used as a substitute for other blocks when building structures). Players are also free to rotate the block base to find any blocks they need for structures.

Players are allowed to move their character anywhere between zero, one, or two spaces. "Spaces" are the crossing points in the grid of tiles and weapon tokens. Characters are not to be placed on a tile or token.

Once the character has been moved, the player is to reveal the top tiles of the stacks around the character's position. Tiles that are already face-up are to remain as is.

Crossing points can be occupied by multiple characters. Tile stacks / weapon tokens may also be depleted during the course of the game. Nonetheless, players can move their character, even if stacks are empty.

Once the structure is built, it can be placed on any space on the player board.

Structures can be built in any biome (e.g. a forest structure doesn't have to be placed on a forest space), however, players may place structures next to spaces that share the same characteristic (e.g. the same biome) to gain more experience points. Players may also build over existing structures by placing the structure tile over one they no longer need.

However, if the number of hearts on the weapon tokens are less than the hearts on the revealed mob tile, the mob stays where it is.

After the fight, the player shuffles their revealed weapon tokens back into their pile.

There are two kinds of mob tiles:

Players are allowed to look at their weapon tokens at any time during the game, such as making sure they have enough hearts to defeat a mob.

There are four weapons with special abilities:

The player who finishes their turn is the first to score.

After each player scores, the overview cards for that scoring round are returned to the game box, and play proceeds to the left of the player who initiated scoring.

Scoring round A (Biome)[]

In the first scoring round, players choose one of the four biomes: forest, desert, mountains, or snowy tundra. Then, the players identify the largest group of connected spaces that share the same biome. For each space that shares the same biome, the players gain the number of experience points printed on the overview card. Spaces that are diagonal from connected spaces do not count towards the total.

For example: A player has four connected spaces of desert, forming the largest biome on their player board. For each desert space, they gain four experience points, for a total of sixteen experience points.

Scoring round B (Materials)[]

In the second scoring round, players choose from one of four materials: wood, sand, stone, or obsidian. Then, the players identify the largest group of connected spaces that share the same material, and so on.

In the third scoring round, players choose from one of four structures: decoration, dwelling, animal house, or bridge. Then, the players identify the largest group of connected spaces that share the same structure, and so on.

End of the game[]

After the third scoring round, players score each mob tile with an experience counter and icon. As opposed to the three scoring rounds, mob tiles count all spaces of a characteristic, regardless if the spaces are connected or not.

For example: A player defeated four mobs throughout the game. The scoring is as follows.

An add-on to the base game, titled Minecraft Builders & Biomes: Farmer's Market was released on October 1, 2020 throughout Europe, and October 15, 2020 worldwide.[3] The add-on allows players to grow crops, trade crops with villagers, and obtain items with abilities to use for their player board.