For the version after the Better Together Update, see Minecraft: Bedrock Edition.

Minecraft: Pocket Edition (often abbreviated as PE or MCPE) was the official mobile version of Minecraft, developed by Mojang Studios. However, when the Better Together Update was released, its name changed to simply Minecraft, and it is now considered part of the Bedrock Edition chain.

Notch hinted that he had "Vague plans about porting Minecraft for Android in the future."

A version for iOS devices was confirmed to be released before 2012 and was subsequently released on November 17, 2011.

The objective of the game remains the same as its original PC, PlayStation 3 Edition, and Xbox Edition counterparts, where players can build virtual realities in a sandbox-based game. The goal is to survive and build a house to protect a player from hostile mobs, or enemies, in survival mode. And to make one's imagination one's only limit in creative mode. The Multiplayer mode is cross-platform compatible between Android and iOS.

A video of an early prototype was released on Twitter, showing the game on the Xperia PLAY. The Alpha version was recently released, and it is no longer exclusive to the Xperia PLAY as of October 7, 2011. The non-exclusive version was going to be released on September 29 for Android but there were still a few severe bugs that needed to be fixed, so the release was delayed until the 7th of October. A version for iOS devices was confirmed to be released before 2012 during an interview with Mojang, and it was subsequently released on the November 17, 2011.

Minecraft PE has been very successful in sales. 30 million copies of Minecraft: Pocket Edition have been sold over the Android and iOS platforms, making it, ironically, arguably more popular than the PC version (which has sold over 18 million copies).

Pocket Edition's differences to the Java edition are listed below:

The Android version features a D-Pad at the bottom-left corner of the screen, which controls movement. The jump button is located in the center of the D-Pad. When moving towards an adjacent block that is one level higher than the Player, a player will automatically jump up the block. A player can place blocks by tapping the screen in the desired location. Destroying blocks is similar to breaking a block on PC, but rather than clicking a mouse, a player taps and holds on the screen. The search button can be used to be able to change the camera to and from a third-person view, but now this has to be done via the pause screen, and the menu and back buttons will open the pause screen. To open the inventory screen, tap the triple dotted button on the right of the hot bar.

Controlled with slide out PlayStation keyboard:

Press jump twice in a row. To fly higher, press the up arrow twice. To fly upwards at a constant rate, hold the jump button on the second tap. Repeat this process with the bottom arrow to go down. (Creative Only, Changed in 0.2.1)

The controls on iOS are very similar to the Android version with the exception of the search and back buttons. To open the pause screen one must press the pause icon in the top right corner. In the Lite Version, the pause button is the inventory instead of the menu. To switch to third person view: first open the menu,

There are 2 types of the Android and iOS versions of PE: Free and Paid.

A multiplayer game in Pocket Edition.

A group of pigs in Pocket Edition.

A lot of enemies in Pocket Edition.

A texture pack in use.

A castle built in Pocket Edition.

The logo before being renamed to Bedrock Edition.
Add a photo to this gallery 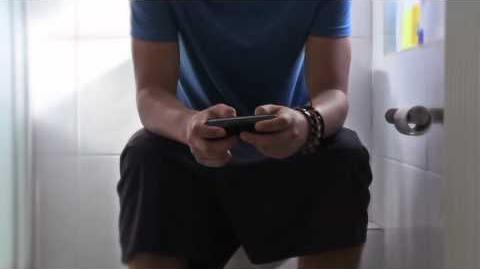 Minecraft - Pocket Edition Trailer
Add a photo to this gallery
Retrieved from "https://minecraft.fandom.com/wiki/Minecraft:_Pocket_Edition?oldid=206869"
Community content is available under CC-BY-SA unless otherwise noted.