The Minecart with Command Block (also known as Command Block Minecart) is a type of Minecart found in Minecraft. This type of minecart is a command block and a minecart combined. This was added in Update 1.7.2.

Much like regular Command Blocks, the minecart with command block is only obtainable by using either /give @p command_block_minecart or external tools. It can also be obtained via /summon, like the other different types of minecarts. However, unlike the other minecart types, command block minecarts cannot be crafted in vanilla Minecraft.

This can be used as a command block on the go. The minecart with command block is used to run commands and travel. It can be more useful than a command block in some situations, and less useful in others. For example, a benefit of command block minecarts is that one does not need to give it input from a "Clock circuit"; for as long as it is powered, it will repeatedly run the command, once every four game-ticks (five times per second). Relative coordinates can be very useful in minecart command block commands. For example, giving the XYZ as "~6 ~2 ~0" (without the quote marks) means "the block that is 6 South and 2 up from the minecart's current location." Since the minecart's location is constantly changing, a setblock command using relative coordinates can "draw" a wall (poorly and with gaps). The ID of the command clock itself is command_block_minecart. 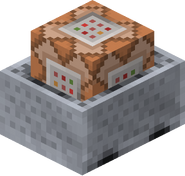 The first texture of the command block in a minecart. 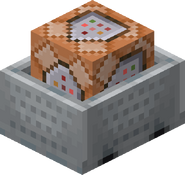 Add a photo to this gallery
Retrieved from "https://minecraft.fandom.com/wiki/Minecart_with_Command_Block?oldid=191324"
Community content is available under CC-BY-SA unless otherwise noted.