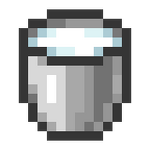 Milk buckets can be obtained from cows, mooshrooms, and goats‌[upcoming: BE 1.17 & JE 1.17] by pressing use while looking at them with an empty bucket.