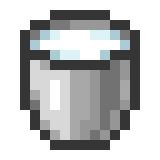 A milk bucket[a] is a drink and ingredient obtained from cows, mooshrooms, and goats.

Milk buckets can be obtained from cows, mooshrooms, and goats by pressing use while looking at them with an empty bucket.