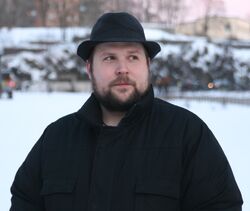 Markus Alexej Persson, more commonly known under the alias Notch, is the creator of Minecraft and one of the founders of Mojang Studios.

Persson started programming at the age of seven, using his father's Commodore 128. He produced his first game (a text-adventure) at the age of eight, with the help of type-in programs. In 2005 he started working as a game developer for King.com,[3] which he left in 2009 to work as a programmer at Jalbum. He is also one of the founders of Wurm Online.[4] After Minecraft sales grew he moved from full-time to part-time at Jalbum and then eventually left to focus full-time on Minecraft in June 2010; many of the original Mojang employees (including former CEO Carl Manneh) were also ex-Jalbum employees. After the full release of Minecraft (1.0.0), Persson transferred creative authority of the game's development to Jens Bergensten.[5]

Persson sold Mojang and all of its assets to Microsoft on September 15, 2014. In a lengthy blog post, Notch states "I love games and I love to program, but I don't make games with the intention of them becoming huge hits, and I don't try to change the world." He then goes on to say that "I've become a symbol. I don't want to be a symbol, responsible for something huge that I don't understand, that I don't want to work on."[6]

Persson left Mojang on November 5, 2014, along with the other founders. He wrote that "as soon as this deal is finalized, I will leave Mojang and go back to doing Ludum Dares and small web experiments. If I ever accidentally make something that seems to gain traction, I'll probably abandon it immediately."[6]

Persson has not been involved with Minecraft since selling Mojang to Microsoft, and the company has since disassociated with him, with a spokesperson for Microsoft stating that "[Persson's] comments and opinions do not reflect those of Microsoft or Mojang and are not representative of 'Minecraft'."[7]

Games and other work

Notch has released much of his work, including, but not limited to:[11]

Notch also has a soundcloud page which includes 53 tracks in total. He would sometimes use his music on his old YouTube channel Nizzotch.

Information from this set of images, verified through this article: