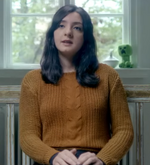 Mariana Salimena Pires is a concept artist at Mojang Studios in Stockholm, Sweden. Salimena joined Mojang in January 2020 and is graduated in arts by the Federal University of Juiz de Fora[1] in Minas Gerais state from Brazil.[2][3][4]

Mariana Salimena owned a illustration studio called Studio Nebulosa in Juiz de Fora, Brazil. She worked on her autoral company for 3 years, from January 2015 to January 2018, with editorial illustration and animation assets. The work took part in published book titles, magazines, advertising campaigns, animations and games. Air France, Medley, Axur, Editora Mol and Editora Globo were some of her clients. In 2019, Salimena introduced herself to game concept art and photoshop courses.

She was an intern in Mojang Studios for 8 months. Salimena has been a full-time concept artist since August 2020. According to her, the conceptual art of Caves & Cliffs was inspired by the episode Diamonds and Lemons from Adventure Time, the cartoon TV show.[5] Besides Caves & Cliffs, Salimena registered several drawings and schematics for The Wild Update.