Maria Lemón is a game developer at Mojang AB, who was hired on October 3, 2016. She works on the PC version of Minecraft.

Maria is a graduate of University of Gothenburg in Sweden. She previously worked as a developer for Rovio, Stardoll, and Respondify AB. 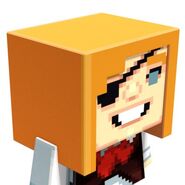 Maria's Twitter avatar
Add a photo to this gallery

Retrieved from "https://minecraft.fandom.com/wiki/Maria_Lem%C3%B3n?oldid=205946"
Community content is available under CC-BY-SA unless otherwise noted.