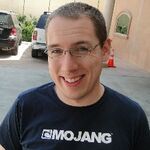 Marc previously worked in customer service for a large insurance company. He performs improvisational comedy, attends every Penny Arcade Expo,[7] and is the director of Minecraft Marathon, an annual event that raises money for the Child's Play Charity.[8]

In August 2014, Marc moved to Sweden to work from the Mojang office,[9] instead of at home in Bellevue, Washington,[10] as he previously did.[11]

Mojang first met Marc at PAX Prime 2011 when he was their Exhibitor Assistant via the PAX Enforcers (convention volunteers). He was later asked to be the Volunteer Coordinator at Minecon 2011, and helped run the two day event. He became part of Mojang on January 16, 2012,[12] and was given the task as Customer Support Manager of creating Mojang's customer support team.[13][14] His jobs included writing the articles on http://help.minecraft.net, creating and improving customer and customer service team processes, and answering emails.

Up until June 2020 Marc was part of team managing content for the Minecraft Marketplace and adding maps to Minecraft Realms.[15]

Marc's current job is an associate producer for the New Games team, responsible for non-Minecraft games from Mojang Studios like Minecraft Dungeons and Builders & Biomes.