Edit
watch 28:07
Minecraft Interactive Experience
Do you like this video?
Play Sound
This article is about the mob. For the Minecraft Dungeons mob, see MCD:Magma Cube. For the block, see Magma Block.
Magma Cube 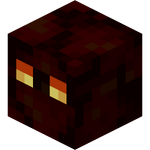 A magma cube is a hostile mob found in the Nether. A magma cube behaves similarly to a slime, but jumps higher and deals a higher amount of damage with its attacks.

They spawn in areas of the Nether at all light levels. The space they spawn in must be clear of solid obstructions and liquids. Due to being inherently fireproof, magma cubes can spawn on magma blocks.

Magma cubes' size is affected by regional difficulty: chances range from 33% for each size at the low difficulty to 16% small, 33% medium, and 50% big with higher difficulty.

Magma cubes spawn uncommonly in nether wastes in groups of 1 to 4.

Magma cubes spawn commonly in fortresses in groups of 4.

Magma cubes spawn commonly in basalt deltas, in groups of 2 to 5.

Magma cube spawners generate in the treasure room of bastions.

The maximum of magma cream can be increased by 1 per level of Looting. Looting 1 averages 0.5 per kill, Looting 2 averages ~0.81 per kill, and Looting 3 averages ~1.21 per kill. Unlike a lot of common loot which picks a random number between 0 and 1 for its drop, the magma cube's drop ranges between -2 and 1 instead. This leads to the 25% drop chance from an unenchanted kill, as well as the relatively low averages with the Looting enchantment since a negative base roll can cancel out the bonus roll made by Looting.

A magma cube seeks out any player or an iron golem within a spherical distance of 16 blocks. If it finds no enemy, it waits for 40 to 120 ticks (2 to 6 seconds), then changes direction by a random amount up to 57.30° (1 radian) left or right, jumps, and repeats the process. If it finds a target, the delay before jumping is 1⁄3 as long (13 to 40 ticks), and the magma cube changes direction directly toward the target before jumping.

Magma cubes cannot be hurt by fall damage or burning, and are not slowed down by lava. They can swim upward in lava and leap above its surface.

Their jump height depends on their size. Their forward speed is twice that of most other mobs. They always make a distinct sound upon jumping up and landing, but no idle sounds.

When a magma cube is killed, it splits into 2-4 smaller magma cubes. Tiny magma cubes disappear when killed, like other mobs.

They can swim in water and attempt to stay on the surface. Like slimes, magma cubes drown if submerged in water for 15 seconds, splitting into smaller cubes if possible.

Unlike most mobs, magma cubes have no pathfinding ability, meaning that they do not avoid falling off cliffs and cannot go around walls, even when chasing a player.

When they are in lava, they hover and try to move to nearby land.

Magma cubes attack by jumping and attempting to land on the player, and cause damage when touched anywhere. As their jump rate is random, magma cubes can be hard to fight.

The health of a magma cube is its size squared; the attack strength is its size + 2, and the armor points are its size tripled.

× 6 of damage per second on normal difficulty. Unlike slimes, tiny magma cubes can deal damage to the player.

This article needs to be updated.
Please update this page to reflect recent updates or newly available information.
Reason: changes in 1.16 (this section is probably up to date, but Slime is not)

Magma cubes have entity data associated with them that contains various properties.

Issues relating to "Magma Cube" are maintained on the bug tracker. Report issues there.