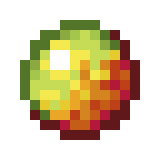 Magma cream is an item used in brewing to create potions of Fire Resistance, and to manually craft magma blocks.

Issues relating to "Magma Cream" are maintained on the bug tracker. Report issues there.