Edit
This article is about the joke feature. For the original mob, see Iron Golem.

This article documents an April Fools' joke.
This feature was exclusively part of a joke version and is not currently planned for addition to regular Minecraft.
It is documented here on the wiki due to being officially-released content by Mojang Studios, even if not present in a final version.
Love Golem 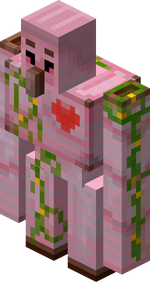 The love golem was a utility mob present in the April Fool's Love and Hugs Update. It was a manifestation of the villager's love.

Love golems spawn under normal iron golem spawning conditions.[verify] They could also be created by the player with the same blocks.

Love golems, despite being a reskinned iron golem, were passive and didn't attack monsters nor players.