Minecraft Wiki
Register
Don't have an account?
Sign In
Advertisement
in: Non-renewable resources, Check the code, Blocks,
and 2 more
English

Edit
watch 28:07
Minecraft Interactive Experience
Do you like this video?
Play Sound
Lodestone 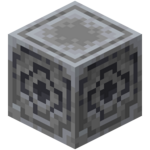 A lodestone is a block that can be used to alter compasses to point toward it. It can be used in all three dimensions.

Lodestone requires a pickaxe to be mined, in which case it drops itself. If mined without a pickaxe, then the mining is slower and it drops nothing.

Lodestones cannot be pushed by pistons or pulled by sticky pistons.

In Bedrock Edition, a lodestone has a block entity associated with it that holds additional data about the block.

Issues relating to "Lodestone" are maintained on the bug tracker. Report issues there.