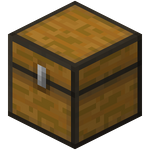 The locked chest was an April Fools block.

When first introduced in Beta 1.4, locked chests were indestructible except to explosions, which allowed it to drop.

From Beta 1.4_01 up until its removal, locked chests were broken the same as normal chests.

In Beta 1.4, if the date is April 1st of any year, the game picks a random location to generate a locked chest in every new chunk. If the chosen location is air and has a solid block below, a locked chest will generate.

Message displayed upon attempting to open the chest. (Сlick to show animation)

Clicking use button on the chest would bring up a screen, and clicking on the "Go to Store" button would forward the player to the "Minecraft Store". It linked to https://minecraft.net/store/loot.jsp, but now the original page was removed, it now leads to the store to buy Minecraft. An archived version of this page can be found here. Various items were "sold" in the Minecraft Store (see below). Clicking on the proceed to checkout button triggered a screamer in which a Velociraptor from the movie Jurassic Park growled loudly and flew across the screen.

Entering items totaling over $10,000 into the cart caused a window pop-up asking if you are prone to seizures. Entering OK made the screen start flashing. When first released, there was no seizure warning label; Notch later implemented it to avoid lawsuits and posts on the forum.

On April 2 (the day following April Fools), the store had the addition of a multicolored banner which read "♥ April Fools'! ♥",[1] accompanied by a MIDI instrumental of Rick Astley's 'Never Gonna Give You Up'. Tobias Möllstam stated that this was "the best script he's written to date."[2]

The store page also used the font tf2build.ttf from Team Fortress 2 which is downloadable from here. 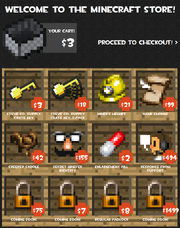 Locked chests could be used as fuel, lasting 15 seconds (or 1.5 items).

Locked chests are a removed block and as such issues relating to them cannot be fixed.