Edit
watch 28:07
Minecraft Interactive Experience
Do you like this video?
Play Sound
Not to be confused with Lightning.
This article is about the game mechanic. For the block called "Light" in Java Edition and "Light Block" in Bedrock Edition, see Light Block.

This article needs to be updated.
Please update this page to reflect recent updates or newly available information.
Reason: Changes were made to mob spawning requirements. 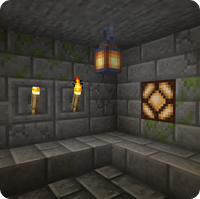 Light levels can be found on the debug screen in Java Edition. Light may come from two sources: the sky and certain blocks. There are 16 light levels, specified by an integer from 0 (the minimum) through 15 (the maximum).

In Bedrock Edition, light-filtering blocks can reduce more than 1 level of block light.

On a surface, this effect produces a diamond-shaped pattern of illumination around the light source.

In Java Edition, when calculating lighting, the shapes of some blocks are detected: pistons, daylight detectors, enchanting tables, farmland, lecterns, stonecutters, dirt paths, snow, end portal frames, slabs and stairs, so that the light passing through them can spread only in specific directions. For example, dirt paths prevents the light from propagating downward, but the light can propagate in other directions.

The sky light level for blocks exposed to broad daylight is 15. Sky light cast onto blocks can spread to darker areas using a flood fill algorithm. Sky light is not reduced at night; rather, the spawning of mobs is determined by internal light values.

When sky light of a level of 15 spreads down through a transparent block, the level remains unchanged. When it spreads horizontally or upward, it reduces 1 light level. However, when it spreads through a light-filtering block, it does not follow the above two rules and attenuates specific light levels.

Sky light with a level less than 15 spreads as block light - when it propagates to adjacent (including top and bottom, six blocks in total) blocks, it is attenuated until it is 0.

In Java Edition, when calculating lighting, the shapes of some blocks are detected: piston, daylight detectors, enchanting table, farmland, lectern, stonecutter, grass path, snow, end portal frame, slabs, and stairs. They have directional opacity, so that the light passing through them can spread only in specific directions. For example, the grass path prevents the light from propagating downward, but the light can propagate in other directions.

In Java Edition, all of the following light-filtering blocks decrease sky light by 1 level (but do not affect block light).

In Bedrock Edition, light-filtering blocks can reduce more levels of block or sky light. The following values are the amounts by which each block decreases the light level.

Here are the levels of internal sky light at a sky light of level 15:

To obtain an internal sky light for a sky light level s less than 15, take the internal level L at 15 and subtract from it the difference between 15 and s: L−(15−s).

Keep in mind that the internal light level is only one of the considerations that apply to mob spawning and plant growth.

Mobs may ignore the light level they are supposed to spawn in after using /fill.[1]

The game uses the light level (instead of internal light level), time, and weather to compute the rendered brightness of a given block or an entity. Light is completely monochromatic and cannot be truly colored.

As mentioned above, sky light is not reduced at night, instead, the brightness curve itself changes based on the time. Entities cast circular‌[Java Edition only] or tridecagonal‌[Bedrock Edition only] shadows; however, these are unrelated to the rendering of blocks.

In the Overworld with the "Moody" brightness setting, full daylight reaches 98% brightness,[luma 1] while at night brightness is reduced to about 17%[luma 1] and is shaded blue. Full darkness is about 5% brightness.[luma 1]

In the Nether, sky lighting doesn't play a role since there is no source of sky light (although if there were, it would reach about 99% brightness.[luma 1]) Full darkness with the "Moody" brightness setting is at about 25% brightness,[luma 1] slightly darker than a block light level of 7 and no sky light in the Overworld, and is shaded orange like block light.

In the End, sky lighting wouldn't play a role even if there were a source of sky light; this can also be seen if lightning is summoned in the End (there is no flash of brightness like there is in other dimensions). Full darkness in the End with the "Moody" brightness setting is about 28% brightness,[luma 1] and is shaded toward a bluish-green rather than the orange of the Nether and of block lighting.

Smooth lighting is a lighting engine that blends light levels across block faces and darkens corners using ambient occlusion to add semi-realistic shadows and glowing from light sources. It affects only rendered brightness, not the light level, so it has no effect on mob spawning or crop growth. It is set on by default. Paintings, item frames[2] and water surfaces[3] are unaffected.‌[Java Edition only]

In Bedrock Edition, smooth lighting can be turned on or off in the Video settings, accessed from the Settings menu. In Java Edition, it has three settings: Maximum, Minimum (an older version of the engine)[4], or Off, and can be changed by accessing Video Options from the Options menu.

Ambient occlusion is responsible for adding shading to an ordinary texture. It is a layer of translucent textures, on top of the normal textures. Overlaying these AO textures onto a texture is called AO mapping. There are about five AO texture patterns used in Minecraft's smooth lighting, excluding flips and rotations, and only three patterns algorithmically. Strictly speaking, it's probably more than that. That's when the intensity changes with the brightness level. But they are solved by tint.

If AO mapping is selected only to the northwest of the voxel, the following pattern is possible.

These classifications allow one the ability to deduce a pattern from the placement of each voxel. The following function can then be used to compute the opacity of the voxels' vertices, depending on the presence of the side and corner voxels.

This generates a 2x2 pixel image using the values of each vertex. The pixels are small, but when zoomed in using anti-aliasing, it gradates. 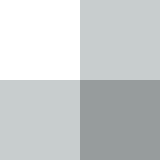 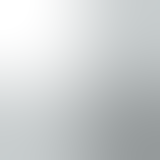 Issues relating to "Light" are maintained on the bug tracker. Report issues there.