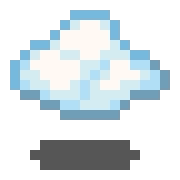 Levitation is a status effect that causes entities to levitate. Entities shot by shulkers get levitated.

Levitation causes the affected entity to float upward at a rate of 0.9×level blocks per second. This does not affect swimming or flying. Negative levels cause the entity to float downward, overriding the usual falling due to gravity; level 0 (amplifier 255) makes falling, jumping and ascending stairs impossible. When damaged by a projectile or anything, this makes the player go higher in the air on level 255.

An affected entity does not take fall damage until the effect wears off, after which the entity falls and takes damage as usual from falling.

Only boss mobs are immune to the effect. While shulkers and flying mobs can have Levitation, they are not affected. Blazes can be affected by Levitation when not hovering.

Mobs tied with balloons ‌[Education and Bedrock editions only] exhibit behavior similar to if they had a high level of levitation. However, this mechanic does not use the levitation effect.

If the player is touching water or lava while affected by levitation, the debuff is completely negated.‌[Java Edition only][3]

In Bedrock Edition, blocking a shulker projectile with a shield still gives the player levitation. It is unknown if this is a glitch.

If a player is given a levitation level over 127, they instead fall down at a fast or slow rate, depending on the value.‌[Java Edition only]

Issues relating to "Levitation" are maintained on the bug tracker. Report issues there.