Edit
watch 28:07
Minecraft Interactive Experience
Do you like this video?
Play Sound
"Console Edition" redirects here. For other uses, see Console Edition (disambiguation).
"Console" redirects here. For commands used on server consoles, see Commands.
This article is about the Minecraft Edition by 4J Studios. For the Edition of Minecraft on the New Nintendo 3DS/2DS systems, see New Nintendo 3DS Edition.

This page describes an edition of the game that has been officially discontinued.
These editions are no longer updated. Some of them have been replaced with Bedrock Edition.
Legacy Console Edition 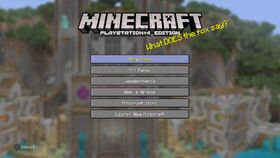 Legacy Console Edition is a discontinued term that refers collectively to several nearly identical editions of Minecraft developed by 4J Studios for game consoles. It comprises of:

Legacy Console Edition introduced new features such as a simplified crafting system, in-game tutorials, leaderboards, built-in mini games and split-screen multiplayer (excluding PlayStation Vita Edition), as well as online multiplayer for up to sixteen players,‌[Xbox One and PlayStation 4 editions only] which required a PlayStation Plus membership (PS4), Xbox Live Gold membership, Nintendo Network ID (Wii U), or a Nintendo Switch Online membership. As with all editions, updates were free of charge.

Previously, the simpler term "Console Edition" was used to refer to these editions on this wiki, but with the release of the Better Together Update, three of the platforms received an implementation of Bedrock Edition as well. Since it no longer comprised all implementations for all consoles, the term was amended.

On September 20, 2017, the Xbox One Edition was withdrawn from the Microsoft Store, in conjunction with Bedrock Edition's Better Together Update. People who owned it were entitled to download the Bedrock Edition of Minecraft for free. Worlds and DLC were intended to be transferable to Bedrock Edition, however some DLC does not carry over. Users can also continue to play on the Xbox One Edition instead. This also happened with the Nintendo Switch Edition on June 21, 2018, and PlayStation 4 Edition on December 10, 2019.[15][16] Again, some DLC does not transfer on these platforms.

Initially, Xbox One Edition was planned to no longer receive updates, starting with the lack of an equivalent update to TU58, but the edition later received CU50, an update adding the MINECON Earth Skin Pack, and later updates resumed entirely with CU51, an update equivalent to TU60, which also added all the features from TU58.

On May 3, 2018, Mojang officially announced that the Xbox 360 Edition, PlayStation 3 Edition, PlayStation Vita Edition, and Wii U Edition would receive the Update Aquatic, but would receive no further feature updates after its release. The Xbox One Edition and Nintendo Switch Edition were excluded from Update Aquatic. The PlayStation 4 Edition would still receive feature updates until December 10, 2019 (including Update Aquatic and Village & Pillage), when it was replaced with Bedrock Edition on the platform, at which point the Legacy Console Edition codebase was discontinued entirely.[16][17] Despite being discontinued, Xbox One Edition and PlayStation 4 Edition are playable on the Xbox Series X|S and PlayStation 5 respectively via backwards compatibility.[18]

By the end of 2020, all Legacy Console Edition games had ceased receiving new updates.

The objective of the game remains the same as its Java and Bedrock editions counterparts, where players can build virtual realities in a sandbox-like environment. There is no preset goal; the player may choose to set their own goals.

Differences from Java and Bedrock Edition[]

Differences from Java and Bedrock editions include:

The different gameplay modes and settings may vary from the other platform versions, such as hardcore mode, as it is currently one of many Java Edition exclusive features.

Using Creative mode permanently disables achievements/trophies and leaderboard updates during normal gameplay on that world, however the core mechanics of flight and infinite resources remain the same.

At the edges of the world, which varies depending on the console, there exists an invisible barrier that cannot be bypassed (not even in Creative Mode). Below sea level, the barrier is comprised of gravel.