Edit
watch 28:07
Minecraft Interactive Experience
Do you like this video?
Play Sound
This article is about the item used for leashing and leading mobs. For the element, see Element § Lead.
Lead 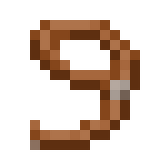 Leads are tools used to leash and lead passive and neutral animals, golems and some monsters.

Wandering traders always spawn with 2 trader llamas, each held with a lead. When a trader llama is detached, either by killing it or the wandering trader, dragging them far apart, or putting the llama in a boat or a minecart, the lead drops at the llama's position.

Using a lead on a mob ties the lead to the mob, allowing it to be moved by the player. Multiple mobs can be held by leads at once, but each mob held requires its own lead.

It is possible to leash the following mobs and entities:

Additionally, villagers, wandering traders, and monsters other than the ones listed above, can be leashed using a map editor or NBT editor.

With a mob on a lead held by the player, using the lead on any type of fence (or wall‌[BE only]) attaches the lead to it with a visible knot, tying the mob to it. To attach it to a wall on Bedrock Edition, the player must hold a lead in the main hand.[1] Multiple leads may be attached to one fence post. A mob tied to a fence tends to stay within 5 blocks of the fence post.

A lead is broken by pressing the use item control on the mob again, hitting the knot, or removing the attached fence post. Leads also break when hit by projectiles. Whenever a lead is removed or broken, it drops as an item at the location of the mob. However, it does not drop when unleashed in Creative mode.‌[Java Edition only][2] A lead does not break if the attached animal dies.

A lead can stretch a maximum of 10 blocks before breaking.

When the player or the knot is more than 7 blocks above the ground, the mob being leashed becomes suspended. In Java Edition, a suspended mob builds up fall damage as it dangles up and down in the air. All fall damage is received at once when the mob lands (with the exception of mobs that are immune to fall damage, or if the landing block resets fall distance).[3]

Most mobs that can be leashed can still be leashed even if attacking the player leashing them, and any attached leads do not break.

Wolves cannot be leashed after becoming angry. Despite this, if they become angry while already leashed, the lead does not break, but it cannot be reattached when broken through other methods while the wolf is still angry.

A lead attached to a hoglin breaks if it becomes a zoglin.

A lead does not prevent mobs from despawning if they normally would despawn.

A lead can be used to remove a mob from a boat without needing to break the boat, if the mob can normally be leashed.

If a chunk unloads while containing a leashed mob (either by the player walking too far away, or traveling to another dimension via a portal), the lead breaks and drops as an item, leaving the mob free to wander around.

Leash knot is an entity created when the player right-clicks the fence while having a mob leashed.

Leash knots have entity data that define various properties of the entity.

Issues relating to "Lead" or "Leash" are maintained on the bug tracker. Report issues there.