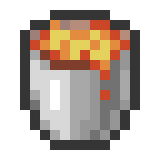 A lava bucket is a bucket filled with lava.

To fill an empty bucket with lava, use it on a lava source block or lava in a cauldron. The block is consumed in the process. Flowing lava does not fill a bucket.

If there is a lava source above the pointed dripstone stalactite, there is a 15⁄256 (~5.9%) chance for it to completely fill an empty cauldron within 10 blocks under the tip with lava after a random tick. This lava can then be scooped with a bucket, making it a renewable resource.

A lava bucket can be used to place down lava sources with the Use Item button. Doing so gives the player the bucket back. Lava buckets can be used to replace some transparent, non-full blocks such as tall grass and water, both flowing and sources.

Lava buckets can be used to break Nether portal blocks by placing the lava on the side of a block next to the portal block.

A lava bucket can be used as an efficient fuel. It has the longest burning value of 1000 seconds, compared to 800 seconds for a coal block (a lava bucket smelts 100 items, and a coal block smelts 80). After smelting starts, the lava bucket turns into an empty bucket.

In Bedrock Edition, journeyman-level armorer villagers buy a lava bucket for one emerald as part of their trades.

In Java Edition, journeyman-level armorer villagers have a 40% chance of offering to buy a lava bucket for one emerald.

A lava bucket can be used to fill a cauldron with lava. The lava damages any entity standing inside the cauldron, unless the entity is immune to fire damage. Flowing water or waterlogging does not affect the lava in the cauldron.

Issues relating to "Lava Bucket" are maintained on the bug tracker. Report issues there.