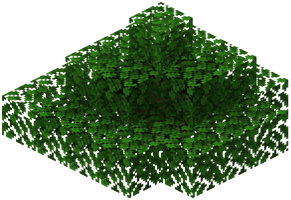 Jungle trees are generated structures native to the jungle biome. Jungle trees range from short bushes to tall trees that reach up to 30 blocks in height. Their wood is of a pale brownish color.

Regular jungle trees lack branches, and the trunk covers a 1×1 space on the ground. The leaves of these 1×1 trees are arranged the same way as the birch tree leaf arrangement.

The jungle tree variants generate naturally in the indicated biomes:

A large jungle tree always generates with dirt under its trunk, even if it spawns partly or wholly over air or water blocks.

When jungle tree leaves decay or are destroyed, a jungle sapling drops 2.5% (1⁄40) of the time – half the chance of other tree leaves.

Jungle tree saplings can be planted on:

1×1 jungle trees require a 3×3 column of unobstructed space at least 5 blocks above the sapling to grow (6 blocks including the sapling itself). Additionally, 1×1 jungle trees require 5×5 layers without obstruction for the top 3 layers of its final height. No horizontal clearance is needed at the base of the tree (a sapling planted in a hole 1 block deep still grows).

In order to grow a 2×2 jungle tree, four saplings must be placed adjacent to each other in a square. For growth to succeed, there must be no blocks adjacent (even diagonally) to the north-western side up to the final height of the tree. Bone meal can be used on any of the saplings to accelerate growth.

2×2 jungle trees require a 5×5 column of unobstructed space at least 11 blocks above the saplings to grow (12 blocks including the saplings themselves). This column is centered on the northwestern sapling. A 3×3 area is required at the base of the tree (the level of the saplings). They can grow up to 32 blocks high.

A dying jungle tree has the standard growth pattern of any other tree, although all exposed logs in the main trunk are covered with vines.

A fallen jungle tree may consist of a single upright log, or a stump. Logs lying on their side are often found 1–2 blocks from the stump. They occasionally have mushrooms on top.

Depending on where the tree generates, the color of the leaves may differ. For example, a jungle tree's leaves are normally bright deep green in the jungle, but they have a beige tint in badlands biomes.

Leaves are checked individually for biome coloration rather than as part of a larger tree; as such, trees that were grown between biomes usually have multiple shades on each side.

Issues relating to "Jungle tree" are maintained on the bug tracker. Report issues there.