From Minecraft Wiki
Jump to: navigation, search
For other uses, see Jungle (disambiguation). 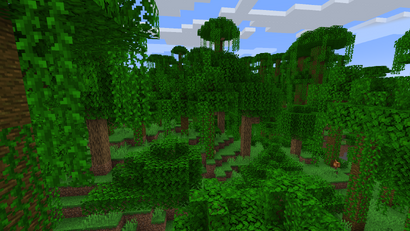 A jungle is a lush, temperate biome full of dense vegetation. Jungles are somewhat rare biomes, usually are expansive in size, and usually generate in green biome clusters. It has a total of seven variants. The sky color is lighter than in other temperate biomes.

Jungles are mostly heavily forested, rivaling the dark forests in tree density. Unlike the short and thick trees of the dark forest, jungle trees can grow tall, and are the tallest trees in the game, with the tallest of them being well over 30 blocks in height. Oak trees may also grow within the tall jungle trees (usually large and balloon oak), and "bushes" made of oak leaves‌[Java Edition only][1] or jungle leaves and a single log grow on the floor of the jungle, which frequently obstruct view of the bright green grass below. Many of the leaves and logs of both types are covered in vines. Jungles contain varying terrain, from the typical dense foliage of the main jungle biomes to the grassy meadows that form in jungle edge biomes.

Cocoa pods and melons generate on jungle logs and in patches on the ground, respectively. Melon patches generate somewhat more often than pumpkin patches do in other biomes. Single shoots of bamboo may generate in the jungle as well. Additionally, the parrot, ocelot and panda mobs exclusively spawn in jungle biomes, and chickens spawn at higher rates compared to other biomes.‌[Java Edition only] Occasionally, a jungle pyramid may generate within the foliage; as they are partially made of mossy cobblestone and also covered in vines, they can prove hard to spot from a distance due to the density of the trees. Jungle terrain is mildly hilly, not unlike the forest biomes, but is exacerbated by the bushes that generate on the floor. Additionally, jungles may generate unique, shallow lakes that are much larger than the typical small ponds found in other biomes, just like forests do.

Survival in jungles can be difficult. While running out of logs is unlikely, obtaining logs can present a challenge due to the heights of jungle trees. Additionally, jungle trees are significantly less sustainable compared to other trees, as their leaves drop saplings only 2.5% of the time, compared to 5% for all other trees; this means large jungle trees often drop only enough saplings to regrow them and not plant any new trees, while small jungle trees may not even drop a single sapling. The dense foliage can easily get a player lost without some sort of trail marker, such as torches, and clearing the foliage for shelter is no easy task, due to both the heights it can reach and the sheer amount of it. However, parrots can make for useful pets when tamed; ocelots cannot be tamed, but can gain trust. They can repel creepers, while parrots can alert players of nearby hostile mobs. Cocoa beans and melons can also be farmed for dye, food, trading, and other such purposes.

Jungle biomes are significantly more resource-demanding to load and render compared to other biomes, particularly jungle hills and modified jungle variants. Thus, players exploring in jungles may wish to turn down their graphics settings to avoid lag and FPS drops.[2]The frequency of large jungle trees generated in Bedrock Edition is lower than in Java Edition.

In jungles, only cod and salmon may be caught during fishing in Bedrock Edition. Otherwise, bamboo and cocoa beans can also be collected as junk.

There are seven jungle biome variants; making jungles the most diverse biomes.

The standard biome variant in the jungle family, jungle biomes feature the distinctive large jungle trees and dense foliage across the ground. Jungle pyramids can generate in this biome, and ocelots, parrots, and pandas spawn here.

In Java Edition, jungle hills use the same mob spawning chances as jungles for ambient categories. As for the others:

In Bedrock Edition, jungle hills use the same mob spawning chances as jungles.

The rare modified jungle variant features much more mountainous terrain, being taller and steeper than jungle hills. The heights, combined with the thick foliage, renders the ground below almost entirely out of sight. Ocelots, parrots, and pandas may spawn in this biome, but jungle pyramids do not generate here, modified jungle biomes are similar to the jungle hills, but can sometimes have differences.

In Java Edition, modified jungles use the same mob spawning chances as jungle hills for hostile and ambient categories. As for the others:

In Bedrock Edition, modified jungles use the same mob spawning chances as jungles.

The jungle edge biome is a technical biome, intended to be a smooth transition from other biomes to the main jungle. Trees still generate here, though at significantly lower rates than the main jungle, roughly comparable to the rate of trees in the savanna biome, additionally only small jungle trees generate in this biome. The grass still takes on a bright green color, though slightly less vibrant than the main jungle. Jungle edges do not entirely border a jungle, however; they may be replaced by rivers or beaches, omitted entirely when jungles border forests or taigas (though not their variants), or widened when jungles border swamps. Ocelots, parrots, and pandas may spawn in this biome, but jungle pyramids do not generate here.

In Java Edition, jungle edges use the same mob spawning chances as jungles for ambient categories. As for the others:

In Bedrock Edition, jungle edges use the same mob spawning chances as jungles.

The bamboo jungle variant generates in large patches within regular jungles. Trees are much less dense in this variant than in the main jungle, comparable to the jungle edge, but boasts countless amounts of bamboo across its landscape. Some swaths of grass blocks are replaced with podzol, similarly to giant tree taigas. Additionally, all naturally-generated trees are large variants; only 2×2 jungle trees and large, branching oak trees may generate, though many of the oaks are simply small "balloon" oaks. Trees planted and grown by the player can be any size. All jungle-exclusive mobs, including pandas, may spawn here. Pandas have a higher spawn rate in bamboo jungle than in regular jungle. Jungle pyramids may spawn here in Java Edition, whereas in Bedrock Edition, there are no jungle pyramids.

Bamboo jungles use the same mob spawning chances as jungle hills for hostile and ambient categories. As for the others:

In Java Edition, bamboo jungle hills use the same mob spawning chances as jungle hills for hostile and ambient categories. As for the others: