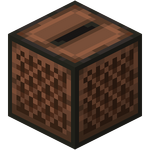 A jukebox is a block used to play music discs.

A jukebox can be broken using any tool, but an axe is the fastest. Jukeboxes also drop all of their contents.

Using a music disc on a jukebox inserts the disc and plays music corresponding to the type of music disc used. Pressing use on the jukebox again ejects the disc and stops any music playing. Music discs play only once before they must be ejected and reinserted. In Bedrock Edition, note particles emit out the top when sound is playing. The sound from the jukebox travels roughly 65 blocks in all directions. It supports all available music discs in the game.

In Bedrock Edition, hoppers and droppers can be used to insert a disc into a jukebox.

Tamed parrots and allays dance when in a 3 block radius from a jukebox that's playing a disc.

Active jukeboxes give off a redstone signal when a redstone comparator is placed directly behind it or through an adjoining block; its strength depends on the ID of the inserted disc. The following table shows the redstone strength output for each disc.

In Bedrock Edition, they also emit a redstone signal when any music disc is played inside.

In Bedrock Edition, jukeboxes disable adjacent hoppers when a music disc is playing inside them, due to them emitting a redstone signal even without using a comparator. Because the hoppers are re-enabled when the song ends, a system of hoppers could be used to automatically eject and reinsert the disc when it is finished playing, causing it to loop. This does not work with a comparator though, as jukeboxes give off a redstone signal when there is a disk in the box. Since they do not eject a disk when a song ends, the jukebox keeps emitting a redstone signal when using a comparator meaning that the hoppers stay locked, preventing this feature from working.

Jukeboxes can be used as a fuel in furnaces, smelting 1.5 items per block.

Jukeboxes can be placed under note blocks to produce "bass" sounds.

Music discs are not included here.

The associated block entity is used to identify which record has been inserted.

A jukebox has a block entity associated with it that holds additional data about the block.

Issues relating to "Jukebox" are maintained on the bug tracker. Report issues there.