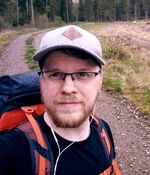 Jonatan 'eldrone' Pöljö is a former 3D artist at Mojang, who previously assisted with the development of 0x10c until its indefinite shelving. Prior to joining Mojang on September 28, 2012, Pöljö worked on a number of major titles for AAA developers, including Capcom Entertainment, Inc.

In addition to his game development, Pöljö was already recognized by the Minecraft community for his custom texture pack, the Eldpack.