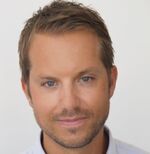 Jonas Mårtensson is the chief executive officer of Mojang Studios. He joined the company as vice president on October 2, 2013, when his twin brother and the CEO of Mojang, Carl Manneh, announced his recruitment.[1] With the acquisition of Mojang by Microsoft in November of 2014 and the subsequent retirement of his brother, he assumed the position of CEO.[2]