Edit
For a guide about all the additions and changes in this phase, see Java Edition guides/Pre-Classic releases.

This article's name is unofficial.
An official name is yet to be given to the subject matter. Please add an official name when reliable sources confirm it.

This page documents an unreleased version.
While there is proof of this version's existence, it was never released to the public.
Pre-Classic 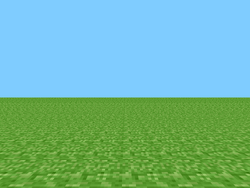 Pre-Classic is the name given to the prototype versions of Minecraft (what is now Java Edition) developed before Classic. It was the very first development phase of the game, lasting for less than a week; very early development of Minecraft started around May 10[1] or May 11[2] and ended on May 16, 2009. The phase was originally named "Cave Game" until the game was changed to "Minecraft: Order of the Stone" then finally to "Minecraft".

This phase began when Markus Persson (Notch) started working on a "Cave Game". He was influenced to create the game by Infiniminer, Dwarf Fortress, Dungeon Keeper, as well as one of his previous games, RubyDung.

The textures used for grass and stone blocks (the latter texture eventually being reworked for cobblestone) were from RubyDung, and internally, the game's class files referred to it as "RubyDung". Other blocks and items were then added, such as saplings, dirt, stone, planks, and more.

Little is known about this development phase, since it was never publicly released, and only Notch could test the versions. Some versions in this phase could previously be seen in videos on Notch's YouTube channel, though most of the videos have been blocked in most countries for unknown reasons.

Five pre-Classic versions are now available to the public through the launcher, with the earliest being rd-132211, originally developed on May 13, 2009.