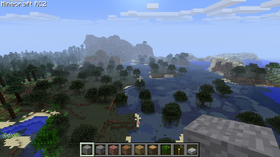 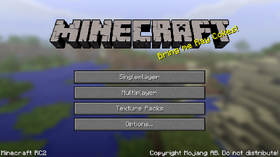 RC2 is the second and final release candidate for Java Edition 1.0.0, released on November 13, 2011,[1] which changes the lighting of blocks in the inventory and fixes a bug.

RC2 was reuploaded twice. The first reupload fixed a bug that broke multiplayer,[2] while the second corrected the version number from "RC1" to "RC2".[3]