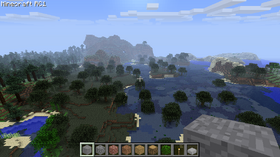 RC1 is the first release candidate for Java Edition 1.0.0 which was released on November 13, 2011,[1] which adds durability to bows, sounds to some mobs, the player, tools and armor, adds some new splashes, and fixes some bugs.

Sounds
Note that these changes apply to the assets to the game, and so apply to all previous versions back to Alpha as well.