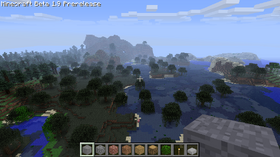 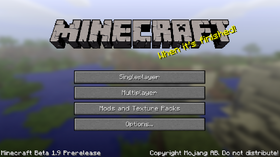 Beta 1.9 Prerelease[1][2][3] is the first pre-release for Java Edition 1.0.0, released on September 22, 2011,[4] which adds nether fortresses, 6 new blocks including nether bricks and some variants, 5 new mobs including villagers, 4 new items including ghast tears, the mushroom island biome and some minor changes.

Initially a pre-release for Beta 1.9, Mojang instead opted to delay the release of this update until MINECON 2011 and release it under the name "Minecraft 1.0.0". This decision was made after a few development versions tagged as Beta 1.9 were already sent out, so the name Beta 1.9 was kept for all of the development versions in the gap between Beta 1.8.1 and Minecraft 1.0.0, other than the release candidates.