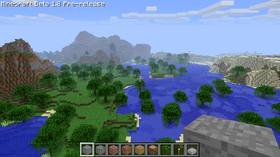 This section of the article is a stub.
You can help by expanding it.

Beta 1.8 Pre-release was reuploaded approximately 24 hours after its initial release to fix bugs and remove some debug features. Features and bugs present in the initial version include: