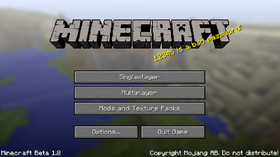 Beta 1.8,[1] the first release of the Adventure Update, is a major version of Java Edition Beta released on September 14, 2011, which introduced features that focused mainly on fighting, exploration, and adventuring, as well as other aspects.

Skeletons drop arrows, bows as normal drop, they drop the same loot if on fire.