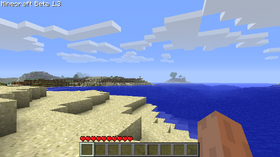 For a guide about all content in this release and the other releases of Beta 1.3, see Java Edition guides/Beta 1.3 releases.

Beta 1.3[1] was a version of Java Edition Beta released on February 22, 2011, which added redstone repeaters, beds, three types of slabs, and a new splash screen, among other changes and fixes.