Edit
watch 28:07
Minecraft Interactive Experience
Do you like this video?
Play Sound
This article documents an April Fools' joke.
There is no actual "Minecraft 3D" version of Minecraft in development.
Minecraft 3D Shareware v1.34 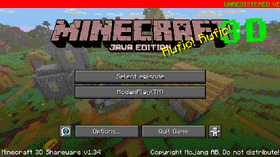 3D Shareware v1.34 is an April Fools' joke release in 2019, officially called Minecraft 3D.[1] This version has many references to video gaming in the 1990s. This release is a fork of the game at version 19w13b.

According to the developers, Minecraft 3D is an "old version" of Minecraft released on April 1, 1994, of which only "a handful of copies were ever made", one of which (a supposed copy of Shareware v1.34) was discovered "amongst all the rubble" lying in the basement of Mojang's old offices. It was said to be "a masterpiece of its all time" featuring "cutting-edge technology" that won many awards,[1] although this is all part of the joke.

In Java Edition, each bonus barrel chest contains items drawn from 2 pools, with the following distribution: