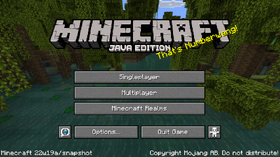 22w19a is the tenth and final snapshot for Java Edition 1.19, released on May 12, 2022,[1] which introduces chat preview, merges /locate and /locatebiome into the new /locate, adds the ability to locate a POI (Point of Interest), the ability to place a template, and fixes bugs.

24 issues fixed
From released versions before 1.19

From the 1.19 development versions

This snapshot has been released on a Thursday instead of Wednesday, just like snapshots before 14w26a