Edit
watch 28:07
Minecraft Interactive Experience
Do you like this video?
Play Sound
This article is about the April Fool's joke snapshot. For the actual snapshot released that week, see Java Edition 22w13a.
This article documents an April Fools' joke.
There is no actual "One Block at a Time Update" version of Minecraft in development.
Minecraft 22w13oneBlockAtATime 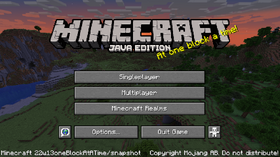 22w13oneBlockAtATime (known as 22w13oneblockatatime in the launcher) is an April Fools' joke snapshot, supposedly the first and only snapshot for the "One Block at a Time Update", released on April 1, 2022,[1] which overhauled the player's inventory as well as the game logic for blocks, items and entities, and redesigned relevant gameplay aspects such as controlling, breaking and crafting. This version is a fork of a commit between 1.18.2 and 22w11a, as it contains several blocks (not complete) from the deep dark biome.

How did we get here?

Glass and Glass Pane (including tinted and stained)

22w13oneBlockAtATime is not supported due to being an April Fools' joke, and therefore issues affecting it get closed as "Invalid" in the issue tracker.