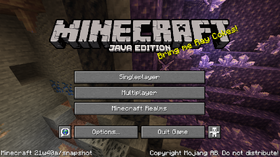 21w40a is the fourth snapshot for Java Edition 1.18, released on October 7, 2021,[1] that merges and renames some biomes, tweaks world generation, mob spawning, and fixes bugs.

46 issues fixed
From released versions before 1.18