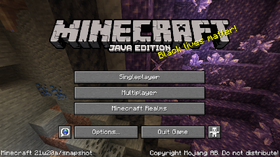 21w20a[1] is the twenty-second and final snapshot for Java Edition 1.17, released on May 19, 2021, which makes tweaks and fixes bugs, most of which relate to axolotl behavior and world generation issues.

76 issues fixed
From released versions before 1.17