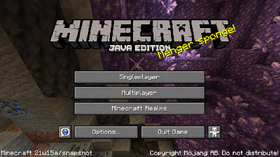 21w15a is the seventeenth snapshot for Java Edition 1.17, released on April 14, 2021,[1] which adds blocks of raw metal and the ability for goats to ram mobs and armor stands, as well as reorders some of the items in the Creative inventory menu. It also reverts most changes to world generation made in previous snapshots, such as height limit and cave types. Due to the technical challenges on the new cave generations and the effects of the COVID-19 pandemic on the developers, these changes were moved to Java Edition 1.18.[2][3][4]

38 issues fixed
From released versions before 1.17