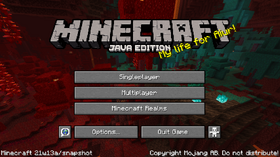 21w13a is the fifteenth snapshot for Java Edition 1.17, released on March 31, 2021,[1] which adds goats and light blocks, as well as tweaks to caves and blob generation, and fixes many bugs.

125 issues fixed
From released versions before 1.17