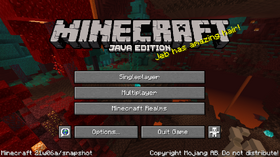 Worlds created prior to this snapshot or after 21w15a cannot be loaded and edited in this version without NBT editors, due to there being no upgrade path towards the expanded height limits in this snapshot. However, it is possible to use Combat Test snapshot worlds due to the data version exceeding that of the 1.17 snapshots.

6 issues fixed
From released versions before 1.17