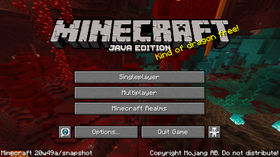 20w49a is the fourth snapshot for Java Edition 1.17, released on December 2, 2020,[1] which adds sculk sensors, the dripstone caves biome, and the ability to expand the world height limit.

28 issues fixed
From released versions before 1.17