Edit
Not to be confused with Java Edition 21w20a.
Minecraft 20w21a 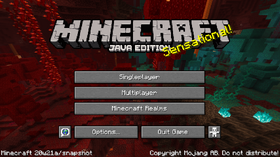 20w21a is the eighteenth snapshot for Java Edition 1.16, released on May 20, 2020,[1] which adds experimental support for custom worlds and fixes bugs.

45 issues fixed
From released versions before 1.16