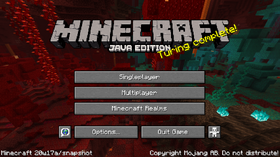 20w17a is the thirteenth snapshot for Java Edition 1.16, released on April 22, 2020,[1] which added the /attribute command, tweaked bastion remnant loot, and lowered the spawn rate of ruined portals, along with bug fixes.

52 issues fixed
From released versions before 1.16