Edit
watch 28:07
Minecraft Interactive Experience
Do you like this video?
Play Sound
This article is about the April Fool's joke snapshot. For the actual snapshot released that week, see Java Edition 20w14a.
This article documents an April Fools' joke.
There is no actual "Ultimate Content" version of Minecraft in development.
Minecraft 20w14∞ 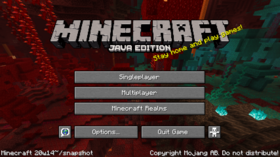 20w14∞ (labeled as 20w14infinite in the launcher, and 20w14~ in game) is an April Fools' joke snapshot, supposedly the first and only snapshot for the "Ultimate Content" update, released on April 1, 2020,[1] which adds new procedurally generated dimensions that randomize existing elements of the game and several ways to access them. 20w14∞ is a fork of 20w13b, which was the most recent snapshot at the time.

Despite being a joke, custom dimensions and custom world generation were implemented in 20w21a and 20w28a respectively.

The following new structure files can be found in this directory data/minecraft/structures:

20w14infinite is not supported due to being an April Fools' joke, and therefore issues affecting it get closed as "Invalid" in the issue tracker.[6]