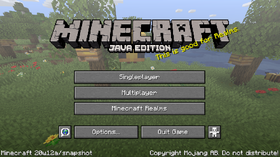 20w12a is the seventh snapshot for Java Edition 1.16, released on March 18, 2020,[1] which adds respawn anchors and polished basalt, as well as several other changes and fixes.

71 issues fixed
From released versions before 1.16