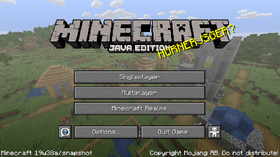 19w38a is the fifth snapshot for Java Edition 1.15, released on September 18, 2019, which makes some technical changes such as adding new parameters to existing commands and makes changes to the rendering system.[1] However, due to a game crashing bug caused by breaking blocks, it was replaced by 19w38b later that day.

11 issues fixed
From released versions before 1.15