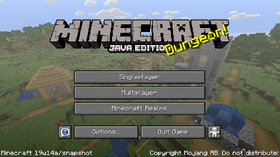 19w14a is the thirty-first snapshot for Java Edition 1.14, released on April 3, 2019,[1] which changes player positioning mechanics, allowing players to crawl in 1-block-tall areas.

106 issues fixed
From released versions before 1.14