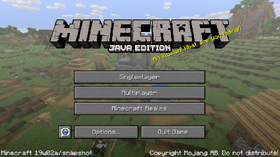 19w02a is the thirteenth snapshot for Java Edition 1.14, released on January 9, 2019, the first of the year.[1] It adds the campfire block, the teammsg command, functionality for the cartography table and lectern, new block interaction statistics and a loading animation when loading a world.

33 issues fixed
From released versions before 1.14